Why you should ask an expert: The Learning Curve (Aka Hard Lessons And Landings)

Experts. Think of the guy that you think knows the most about cars or bikes, in the world. Wayne Carini you say? Richard from Gas Monkey Garage? I say go bigger: think of the people that engineer race cars, and the people who take them to the limit. Regardless of who you look at, at some point, they were all completely clueless too. So where you, so was I.

This is my story: being raised in Italy, like many European kids, my pre-teen years were spent dreaming of the freedom that having a moped would bring. At the time (early 90's) when you turned 14 in the land of Ferrari and Lamborghini, you were allowed to ride on a 50cc 2 stroke motorcycle with zero training and zero knowledge of road and traffic rules. Also no licence plate... Crazy times.

I finally turned 14 and all my dreams were far from a simple automatic scooter or a Vespa, they had the shape of an Aprilia RS50, a true small motorcycle complete with a proper gearbox, fairings, instrument cluster etc... The fastest, biggest, coolest and baddest little motorcycle you could get. It looked like this:

These were the color options for 1995, notice the Chesterfield livery (cigarettes) on a bike intended for 14 year olds!

While my grades weren't top tier moped material, I had a loving mother that understood that no moped meant no social life, so she coerced my dad into buying me "something". What I got was this: 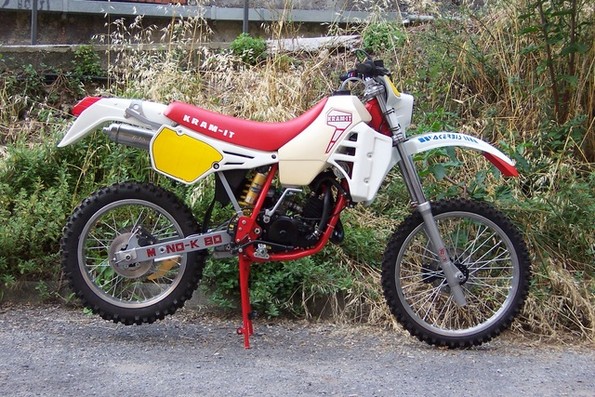 This one actually looks cool as it's an unmolested, collector grade specimen (the stuff I would be brokering today). Mine was 9 years old when I got it, which made it a 50 year old motorcycle considering it had only been ridden and abused by teenage kids before me. Let me explain that: take a valued possession of yours and let a teenger take care of it for 9 years. Yeah, that bad.

It was faded, rusty, had leaks everywhere. It even had a gigantic shift peg extender welded to the shift lever: the last owner had a prosthetic leg and modified the bike so he could use it. Said concoction would weigh so much, that the first time I attempted to jump the bike (aka ride off a sidewalk at a brisk pace), it downshifted on its own upon landing, sending my celibate crotch to meet his new friend Mr fuel tank... I soon ordered a standard shifter.

Some time passed (think a Summer) and I was a consumed biker. Yeah, no, I had no idea of what I was doing, but me and my friends would literally live, breathe, think mopeds all the time. It was our world. This world however didn't include maintenance: my idea of maintenance was to occasionally clean it and try to fit decals and other bling to try and make it look cool.

It never worked: it was a POS before I started, and it ended up being a POS with stickers, a poorly fitting rear fender from a much newer bike, and a loud Leovince exhaust. That's when I overheard some (actual) motocross rider mention that there was something called an air-filter and that it had to be cleaned often. No problem: my dad had some tools and I was a biker.

I soon realized that I had to remove the seat to access a simple foam air filter, by removing two large screws towards the rear end of said seat. With the filter off, I washed it with soapy water and dried it with my mom's hair dryer before popping it back in place. I worked extra hard to get this sticky green stuff out of it. I learned years later that said stuff was the filter oil, and was there to catch dust particles and it was supposed to be reapplied when needed. But I didn't have time for such silly things.

I also found that the seat would stay in place just fine without those two heavy and annoying bolts holding it in place, so I thought about the words of Enzo Ferrari "all that is not there, has no weight and cannot break" and tossed them. I was happy with my improved power-to-weight ratio that also gave me quicker access to my air filter. Silly engineers and their pointless bolts.

Some weeks later I was with two friends at what had in essence become our training ground: an abandoned construction site with plenty of dirt hills and gravel. They both had the mighty Honda CRE50, which literally was a Ferrari compared to what I was riding. 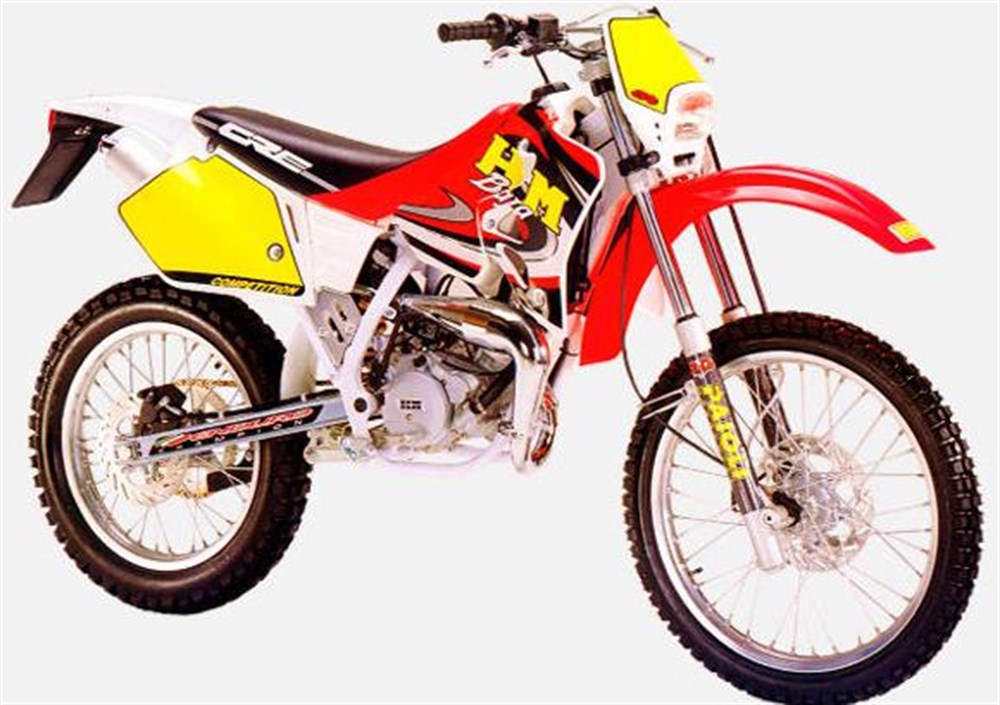 This was IT in my town

It was so far superior that I had no recourse to any point that was ever brought up. I couldn't even say that mine was slower BUT better on gas. It was beat even in that department. This prompted quite a bit of fun. As in them making fun of me. Which didn't sit well, pushing me to use my skill to compensate for the technical gap: I decided to show them how a motocross bike (such as mine) was meant to be ridden.

There was this straight path we had carved by riding on it multiple times, it was maybe 200 feet long and aimed for a 6 foot jump that had a very steep take off. They would hit it at circa 30 mph and would take off with both wheels and land graciously with a commanding thump, masterfully absorbed by their advanced Paioli forks and rear shock. My bike didn't reach said speed, not even close, then again my rear shock was in essence just a spring and my front forks were blown and had little travel to absorb any impact. I would get the front wheel off the ground and little else.

Eager to show my skills, I dismounted my iron horse and while my friends kept jumping like pros, started ripping bushes, moving stones and small boulders out of the way thus creating a path that connected our little track to the main road, extending the "runway" indefinitely. I then waved my friends away "ha, ye simpletons, I shall show you" and lined up for the jump... At 14, when your ego has been repeatedly bruised and you see a chance to redeem it, you have NO FEAR: I hit the jump that I would normally approach in 3rd gear in 5th gear, flat out. I had never really jumped a bike before, but I soon found myself FLYING higher than anyone had ever done there. That's when slow motion kicked in.

I remember thinking "damn, it worked", and noticing how far away my friends and the ground were. I hadn't really thought about the landing part but then again something else was calling for my attention, at the corner of my left eye. There was something flying next to me, and it was red, and it said KRAM-IT on it, in white. It was the seat that had come off, having no bolts to secure it in place. That's when time STOPPED.

My quick and young mind did one of those "rewind" scenes you see in movies, to mentally go back to when I had removed the seat, to find out what was under it: the upper mount of the shock absorber, a roundish red metal fist aimed at my butt. I landed so hard that the pain in my private parts immediately took over the need to steer the bike, so I let go of the controls and grabbed a handful of genitals while screaming in pain. The bike slowed down as I fell to the side, still sitting on it, still with my balls cradled. In all this I was wearing shorts (safety first!), and the exhaust that would stick out on the side of the bike quite a bit, hot from the engine running, burned into my skin the reverse name of it's maker "illeraniM irotoM" (Motori Minarelli) for the rest of the Summer. Miraculously both me and the bike survived the experience, and I soon started working at a motorcycle garage during summers and time off school, where I would have two fantastic mentors that taught me how not to squash my balls on the bike twice a season.

Today I look back at those crazy early days and I think how fortunate I have been to have had all those experiences, and then meeting the right kind of mentors along the way. So if you are just starting to learn and get interested in this world and find it confusing: you're not alone. We have ALL been a 14 year old kid with a lot of passion and no clue on what to do with it. Be humble, take your time researching things online (what an amazing option to have!), and ask for help from experts.